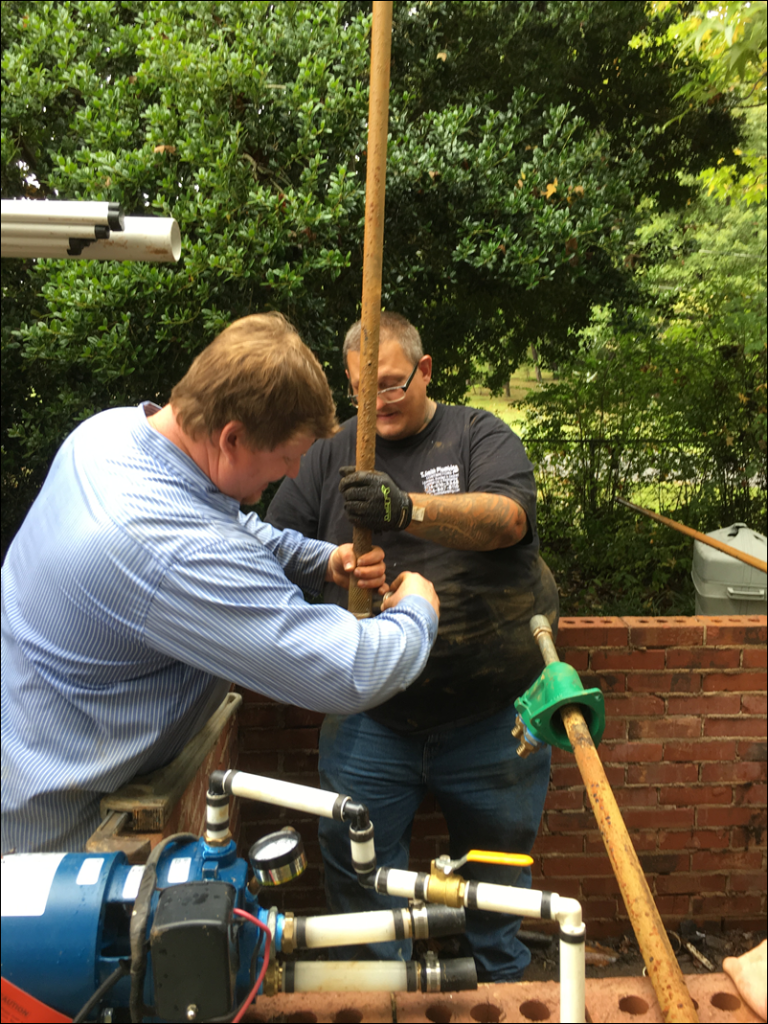 Need a new well pump installed? Or does your well pump need repair?

Our experienced plumbers have years of experience with well pumps – both installation and repair. We will have your well running properly in no time.

We will always be up front and honest about what work needs to be done. We believe in delivering top-notch work at affordable rates.

For all of your well pump needs, call us – the local well pump experts!

A water well is an excavation or structure created in the ground by digging, driving, boring, or drilling to access groundwater in underground aquifers. The well water is drawn by a pump, or using containers, such as buckets, that are raised mechanically or by hand.

Wells can vary greatly in depth, water volume, and water quality. Well water typically contains more minerals in solution than surface water and may require treatment to soften the water.

History: The world’s oldest known wells, located in Cyprus, date to 7500 BC. Two wells from the Neolithic period, around 6500 BC, have been discovered in Israel. One is in Atlit, on the northern coast of Israel, and the other is the Jezreel Valley.[1]

Chand Baori, a stepwell built in the 9th century.
Camel drawing water from a well, Djerbaisland, TunisiaWood-lined wells are known from the early Neolithic Linear Pottery culture, for example in Kückhoven (an outlying centre of Erkelenz), dated 5090 BC and Eythra, dated 5200 BC in Schletz (an outlying centre of Asparn an der Zaya) in Austria.[2]

Australian Aborigines relied on wells to survive the harsh Australian desert. They would dig down, scooping out sand and mud to reach clean water, then cover the source with spinifex to prevent spoilage. Non-Aborigines call these native wells, soaks or soakages.

Stepwells are common in the west of India. In these wells, the water may be reached by descending a set of steps. They may be covered and are often of architectural significance. Many stepwells were also used for leisure, providing relief from the daytime heat.

A qanatA qanat is an ancient water collection system made up of a series of wells and linked underground water channels that collects flowing water from a source usually a distance away, stores it, and then brings the water to the surface using gravity. Much of the population of Iran and other arid countries in Asia and North Africa historically depended upon the water from qanats; the areas of population corresponded closely to the areas where qanats are possible.

In Egypt, shadoofs and sakiehs are used.[3][4] When compared to each other however, the Sakkieh is much more efficient, as it can bring up water from a depth of 10 metres (versus the 3 metres of the shadoof). The Sakieh is the Egyptian version of the Noria.

From the Iron Age onwards, wells are common archaeological features, both with wooden shafts and shaft linings made from wickerwork. 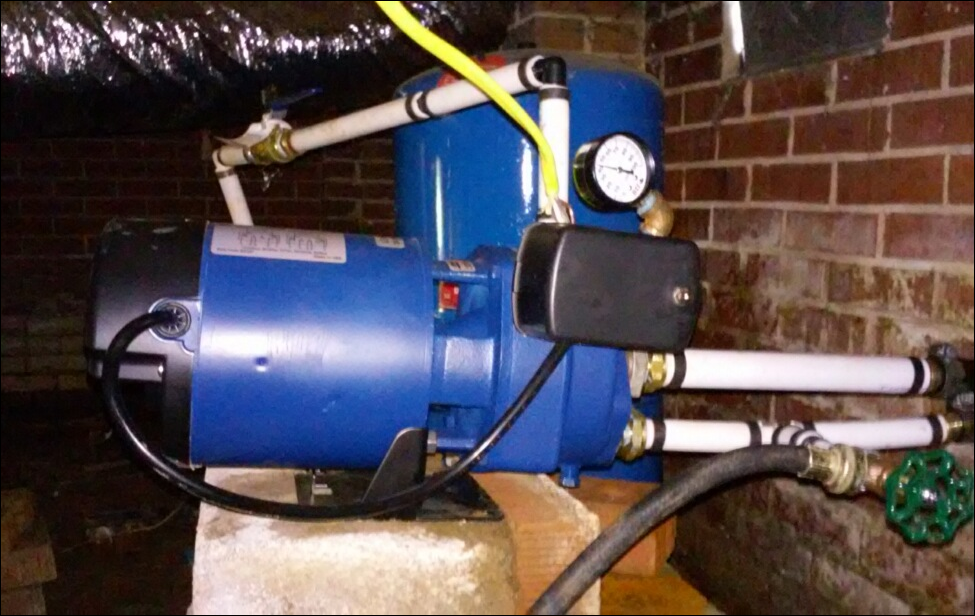 Types Dug Wells
A dug well in a village in Faryab Province, Afghanistan.
View into a hand-dug well cased with concrete rings; Ouelessebougou, Mali.
A dug well in a village in Kerala, India.Until recent centuries, all artificial wells were pumpless hand-dug wells of varying degrees of formality, and they remain a very important source of potable water in some rural developing areas where they are routinely dug and used today. Their indispensability has produced a number of literary references, literal and figurative, to them, including the Christian Bible story of Jesus meeting a woman at Jacob’s well (John 4:6) and the “Ding Dong Bell” nursery rhymeabout a cat in a well.

Hand-dug wells are excavations with diameters large enough to accommodate one or more persons with shovels digging down to below the water table. They can be lined with laid stones or brick; extending this lining upwards above the ground surface to form a wall around the well serves to reduce both contamination and injuries by falling into the well. A more modern method called caissoning uses reinforced concrete or plain concrete pre-cast well rings that are lowered into the hole. A well-digging team digs under a cutting ring and the well column slowly sinks into the aquifer, whilst protecting the team from collapse of the well bore.

Hand dug wells provide a cheap and low-tech solution to accessing groundwater in rural locations in developing countries, and may be built with a high degree of community participation, or by local entrepreneurs who specialize in hand-dug wells. They have been successfully excavated to 60 metres (200 ft). Hand dug wells are inexpensive and low tech (compared to drilling) as they use mostly hand labour for construction. They have low operational and maintenance costs, in part because water can be extracted by hand bailing, without a pump. The water is often coming from an aquifer or groundwater, and can be easily deepened, which may be necessary if the ground water level drops, by telescoping the lining further down into the aquifer. The yield of existing hand dug wells may be improved by deepening or introducing vertical tunnels or perforated pipes.

Drawbacks to hand-dug wells are numerous. It can be impractical to hand dig wells in areas where hard rock is present, and they can be time-consuming to dig and line even in favourable areas. Because they exploit shallow aquifers, the well may be susceptible to yield fluctuations and possible contamination from surface water, including sewage. Hand dug well construction generally requires the use of a well trained construction team, and the capital investment for equipment such as concrete ring moulds, heavy lifting equipment, well shaft formwork, motorized de-watering pumps, and fuel can be large for people in developing countries. Construction of hand dug wells can be dangerous due to collapse of the well bore, falling objects and asphyxiation, including from dewatering pump exhaust fumes.

Driven wells[edit]Driven wells may be very simply created in unconsolidated material with a “well hole structure”, which consists of a hardened drive point and a screen (perforated pipe). The point is simply hammered into the ground, usually with a tripod and “driver”, with pipe sections added as needed. A driver is a weighted pipe that slides over the pipe being driven and is repeatedly dropped on it. When groundwateris encountered, the well is washed of sediment and a pump installed.[7] 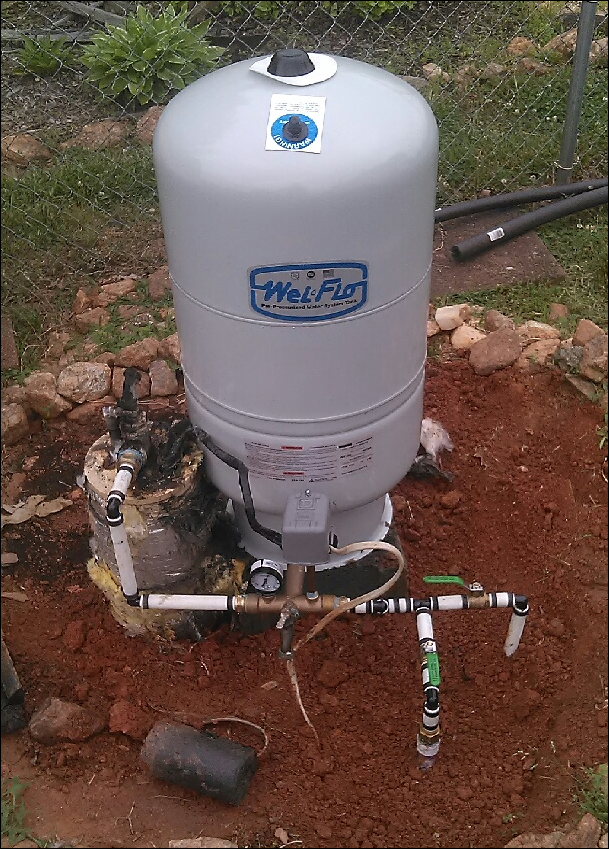 Drilled wells can be excavated by simple hand drilling methods (augering, sludging, jetting, driving, hand percussion) or machine drilling (rotary, percussion, down the hole hammer). Deeprock rotary drilling method is most common. Rotary can be used in 90% for formation types.

Drilled wells can get water from a much deeper level than dug wells can – often up to several hundred metres.

Drilled wells with electric pumps are used throughout the world, typically in rural or sparsely populated areas, though many urban areas are supplied partly by municipal wells. Most shallow well drilling machines are mounted on large trucks, trailers, or tracked vehicle carriages. Water wells typically range from 3 to 18 metres (9.8–59 ft) deep, but in some areas can go deeper than 900 metres (3,000 ft).[citation needed]

Rotary drilling machines use a segmented steel drilling string, typically made up of 6 metres (20 ft) sections of galvanized steel tubing that are threaded together, with a bit or other drilling device at the bottom end. Some rotary drilling machines are designed to install (by driving or drilling) a steel casing into the well in conjunction with the drilling of the actual bore hole. Air and/or water is used as a circulation fluid to displace cuttings and cool bits during the drilling. Another form of rotary style drilling, termed ‘mud rotary’, makes use of a specially made mud, or drilling fluid, which is constantly being altered during the drill so that it can consistently create enough hydraulic pressure to hold the side walls of the bore hole open, regardless of the presence of a casing in the well. Typically, boreholes drilled into solid rock are not cased until after the drilling process is completed, regardless of the machinery used.

The oldest form of drilling machinery is the cable tool, still used today. Specifically designed to raise and lower a bit into the bore hole, the ‘spudding’ of the drill causes the bit to be raised and dropped onto the bottom of the hole, and the design of the cable causes the bit to twist at approximately ¼ revolution per drop, thereby creating a drilling action. Unlike rotary drilling, cable tool drilling requires the drilling action to be stopped so that the bore hole can be bailed or emptied of drilled cuttings.

Drilled wells are usually cased with a factory-made pipe, typically steel (in air rotary or cable tool drilling) or plastic/PVC (in mud rotary wells, also present in wells drilled into solid rock). The casing is constructed by welding, either chemically or thermally, segments of casing together. If the casing is installed during the drilling, most drills will drive the casing into the ground as the bore hole advances, while some newer machines will actually allow for the casing to be rotated and drilled into the formation in a similar manner as the bit advancing just below. PVC or plastic is typically welded and then lowered into the drilled well, vertically stacked with their ends nested and either glued or splined together. The sections of casing are usually 6 metres (20 ft) or more in length, and 6 to 12 in (15 to 30 cm) in diameter, depending on the intended use of the well and local groundwater conditions.

Surface contamination of wells in the United States is typically controlled by the use of a ‘surface seal’. A large hole is drilled to a predetermined depth or to a confining formation (clay or bedrock, for example), and then a smaller hole for the well is completed from that point forward. The well is typically cased from the surface down into the smaller hole with a casing that is the same diameter as that hole. The annular space between the large bore hole and the smaller casing is filled with bentonite clay, concrete, or other sealant material. This creates an impermeable seal from the surface to the next confining layer that keeps contaminants from traveling down the outer sidewalls of the casing or borehole and into the aquifer. In addition, wells are typically capped with either an engineered well cap or seal that vents air through a screen into the well, but keeps insects, small animals, and unauthorized persons from accessing the well.

At the bottom of wells, based on formation, a screening device, filter pack, slotted casing, or open bore hole is left to allow the flow of water into the well. Constructed screens are typically used in unconsolidated formations (sands, gravels, etc.), allowing water and a percentage of the formation to pass through the screen. Allowing some material to pass through creates a large area filter out of the rest of the formation, as the amount of material present to pass into the well slowly decreases and is removed from the well. Rock wells are typically cased with a PVC liner/casing and screen or slotted casing at the bottom, this is mostly present just to keep rocks from entering the pump assembly. Some wells utilize a ‘filter pack’ method, where an undersized screen or slotted casing is placed inside the well and a filter medium is packed around the screen, between the screen and the borehole or casing. This allows the water to be filtered of unwanted materials before entering the well and pumping zone.

An automated water well system powered by a jet-pump.

An automated water well system powered by a submersible pump.

A water well system with a cistern.

A water well system with a pressurized cistern.

A section of a stainless steel screen well.